"Nothing Serious" by BARBARA MORGENROTH 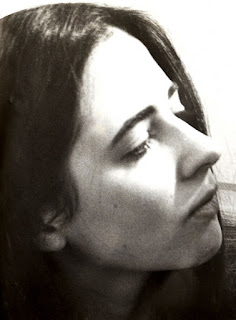 I was born in New York City and but now live somewhere else. By now, I think of myself as a country girl and know more about gardening and animals than how to ride the subway.

Starting my career by writing books, (and I did the cover photography for my first two published by Atheneum so continuing to do the covers to my new books is predictable), I was actually aiming at the small screen. Television seemed like the perfect place for me even if I had no clue how to get there. Life is funny and often presents opportunities. Through a neighbor, I wound up getting an introduction to a lower honcho at ABC and an audition to write for them. My hopes were more than dashed, they were crushed, disintegrated, evaporated, demolished when ABC couldn't find a place for me on General Hospital. (No Luke and Laura in my future!) To ease the crushing disappointment, I wrote In Real Life I'm Just Kate about a 17 year old girl who becomes a star on a soap opera. That became an open sesame moment and shortly thereafter I became the last headwriter for NBC's daytime serial, The Doctors, where I was ordered by the network to kill Alec Baldwin, shooting him not once but twice. With two different guns. From different directions.

When I left television, I became involved in antiques and auctions.
This provided many experiences and ideas for stories.
Nothing Serious is owes much to that time in my life—complete sets of Playboy magazine from issue 1 stacked next to an Art Deco bedroom set with portraits from the 1800’s leaning up against the armoire.  It’s always possible to find a treasure and Paige found one in Jonathan. 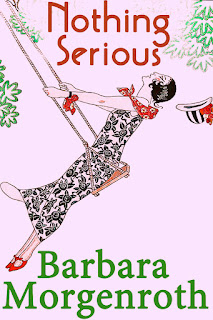 “I was mainlining my modem connection. Some people snort the Internet but I plugged it right into a vein. Very dangerous but all the big girls living on the techno-edge play with injectable Internet.” That’s how Paige Elliot described her life. She was living in a virtual world until she yanked the plug out of the wall, disconnected herself from the cyberworld and left New York City for the Catskills.

Going cold turkey from her computer addiction is much harder than she would have imagined. Paige experiences deep withdrawals and finds herself trying to score some computer time from her neighboring antique dealer on Main Street, the very attractive Jonathan “Blue is his color and he knows it” Macklin.

In Kanah Springs, there's such a collection of eccentrics, Paige looks positively normal by comparison. With nowhere left to turn, Paige must make a go of her shop, Nothing Serious, which sells urban reclamation fountains among other objets d'art. Once she can breath evenly after adapting to the crisis of having no email, she's able to discern how truly appealing Jonathan is. By then Paige has nearly nailed her hand to the store's facade in an attempt to get her sign up and has traded for the use of nearly every tool in Jonathan's store with offerings of blueberry muffins.

When Paige's extensive knowledge of fine art comes into play at an auction and she spots a rare portrait, she must borrow money from Jonathan to pay for it. Unfortunately the million plus dollars Paige gets for the lost masterpiece, is used to bail out a local character who spells his name with no vowels and who hacked into the computer of a data mining company. The thirty five hundred dollars is a far cry from Jonathan's split and he thinks he's been had. Paige has to scramble to make everything right knowing she loves Jonathan dearly and so deeply the only way she can communicate the emotion is to return to her fine arts roots and paint again.

Paige has been treating life, her art and love as nothing serious for so long, can she change in time to be with Jonathan?

2 ebook will be for the giveaway for every tour post